Updates to abilities and armor rules! 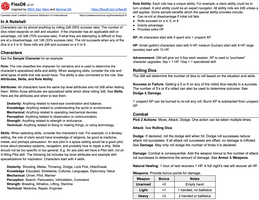 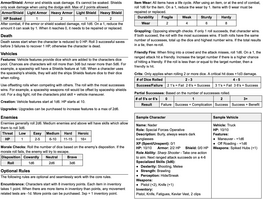 These changes were a result of play testing and feedback from a peer review.

Role Specific Abilities
As explained in an earlier post, each role has a special ability which makes the characters more unique. This minor change really helped the game feel more completed. With this rule, you can now come up with a unique ability for your character based on their role. Clerics can turn undead, Rogues can backstab, Fighters have more attack skills.

Armor Changes - Again
Ok, I think the armor rules are finally stable. I rolled back to a previous version which had armor soaking damage, which feels right. The difference is armor can't soak ALL damage and I also updated the shield rules. Shields can only be used to soak damage when dodging. Also, a 6 cannot be soaked! This keeps combat deadly and prevents characters from being impervious to damage. Before, a character could walk into a battle and feel almost invincible. Allowing 6's to always inflict damage will cause players to be a little more cautious about charging into battle even with awesome armor.

Partial Successes
I brought back the partial success table as I know this is a popular movement in the RPG world.