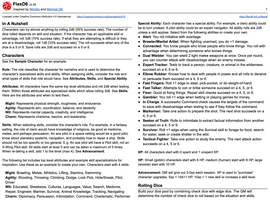 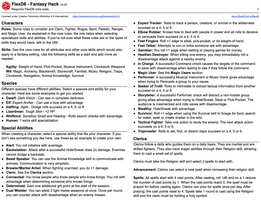 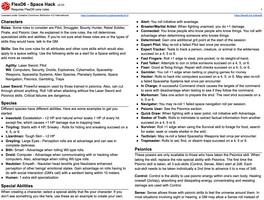 One of the things about FlexD6 that I've been trying to figure out is how to allow characters to advance their skill. Taking a skill allows rolling 3d6, but it couldn't go any further than that. 3d6 gives a 70% chance of success, but heroes should be able to advance further than that, right!?

An idea for a possible way to advance skills further was sparked by a post I read about a similar issue in a similar game. The idea is to have 2 pools of dice. One pool is called the check dice. Check die are the base die that the system uses: 1d6, 2d6, or 3d6.  The number of dice rolled for the check is determined by environment, situation, skill level of the hero, etc. A 5 or 6 on the check die count as a success (1-3 successes typically). Players typically roll 2d6 for everything unless they have a skill or advantage, then they roll 3d6.

This update introduces a new pool of die called Edge Die. Characters can now take a skill multiple times, adding points to their skill each time it is taken. When using that skill, they'll add the number of dice for the skill to their edge dice pool.  So, if a character has Melee 2, they will roll 2 edge dice. Very similar to the check dice pool except that it is only possible to get 1 success from the Edge Dice pool. Getting a 6 on any of the edge dice counts as 1 success. If you roll two or more 6's in the edge dice pool, it still only counts as 1 success.

Ok, so it sounds a little confusing? It isn't. It is actually very easy if you do this one simple thing. Use different size or color dice for your edge pool and roll them all at the same time. That way you can evaluate the dice pools separately and determine the number of successes.

Here's a scenario as an example.

Thor has Melee 2 and is using his light sword which does +1 damage. He is attacking a pesky skeleton with his trusty sword. He picks up 3d6 for his check dice pool and 2d6 for his edge pool.  He then rolls them all at once and gets the following result:

The result is 3 successes: 2 from check dice and 1 from edge dice. He does 4 damage to the skeleton.

That would be 1 success: 0 from check dice and 1 from edge dice. He does 2 damage to the skeleton.

The Edge Dice concept could be applied to weapons or equipment too. Let's say Thor's sword was magic and gave him +1 Edge. He'd then roll 3d6 in is Edge Dice pool giving him even more of a chance of success.

One key rule is that the edge dice pool can't have more than 4 dice in it.

There were some other changes as well:

Let me know how the edge dice concept works for you. It was fun when I play tested it!